The year old colt BENGALI AA was highly evaluated in hand and after a great presentation in the corridor, both in gallopn and trot, placed first. The commenting judge said that he was „impressive”.

AGIAS AA, highly evaluated in hand, received 2×9,5, 1×9 for type, 1,9,5, 1×9, 1×8 for head, neck and body, despite a positive assessment by the judge („very forward going, with a robust trot”) he also „lacked balance”. The colt received a lesse number of points and placed sixth.

The year old EWILLA AA also received high marks during the presentation in hand, but was evaluated not so well in the corridor („trotting up, galopping too fast, not very effetcively”). In the end she wound up out of the top five.

In the two year old fillies class we were represented by ELIANA AA. With a very high score in hand: 3×9,5 for type, 2×9,5 for head, neck and body, her score in total was 44,10 pts. She also performed well in the free jumping corridor („good in movement, dynamic, with good hindquarter work”), whe placed second. 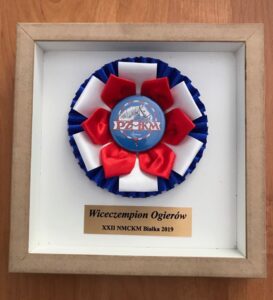 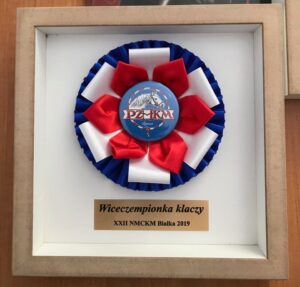 During the Championships in Białka we also had the oppotunity to admire the get of many stallions bred in Janów Podlaski: Barnaba, Armani, Drop, Awans, Emaks, Efekt and Emark.